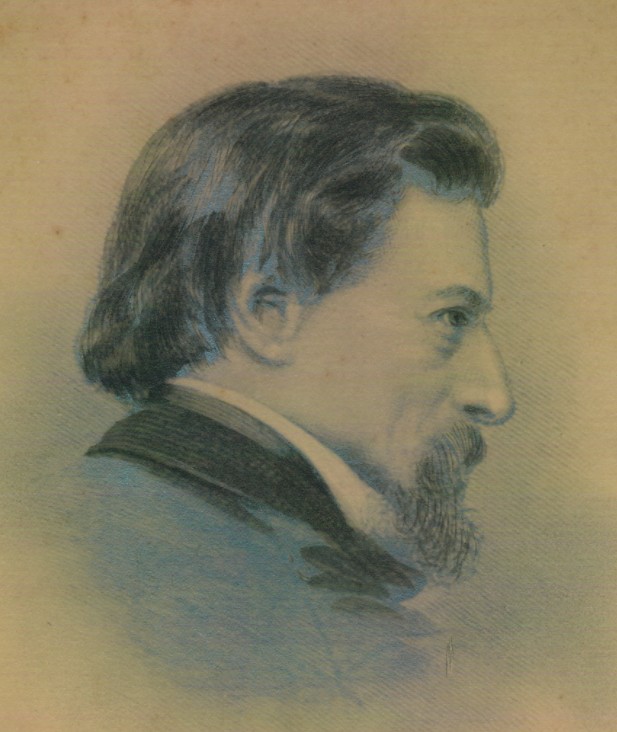 Charles Henry Bennett was born at 3 Tavistock Row in Covent Garden on 26 July 1828 and was baptised a month later in St. Paul's Church, Covent Garden. He was the eldest of the three children of Charles and Harriet Bennett, originally from Teston in Kent. His father was a boot-maker. Nothing is known of Charles's childhood, although it is likely that he received some education, possibly at St. Clement Dane's School on nearby Stanhope Street. At the age of twenty, Charles married Elizabeth Toon, the daughter of a Shoreditch warehouseman, on Christmas Day 1848, also in St. Paul's Church. Their first son (another Charles) was born a year later and by 1851 the family was settled in Lyon's Inn in the Strand. At the time of their wedding, Charles was attempting to support his family by selling newspapers, but three years later, in the 1851 census, he described himself as an artist and portrait painter. Charles and Elizabeth's family kept growing and moving, and by 1861 they were living in Wimbledon with their six children. Charles, the eldest, was by this time at school, while the youngest, George, was just seven months old.

As a child, Charles developed a passion for art, drawing for his inspiration the motley crowds he saw daily in the market. His father was unsympathetic and stern in his dismissal of what he considered a waste of time. As an adult, Charles became part of the London bohemian scene, and was a founder member of the Savage Club, each member of which was "a working man in literature or art". As well as socializing over convivial dinners, members of the club published a magazine, The Train. Charles Bennett contributed many illustrations, signed 'Bennett' rather than with his CHB monogram, but the magazine was short-lived. The middle of the nineteenth century saw the launch of many cheap, mostly short-lived periodicals in London. The Devil in London, The Penny Trumpet, The Whig Dresser and The Squib only lasted a few weeks, while The Man in the Moon survived for two and a half years. In 1847, James Hannay, novelist, journalist and protégé of Thackeray, founded Pasquin, followed in 1848 by The Puppet Show and The New Puppet Show (1849). Charles Bennett contributed small illustrations to these and other magazines, although identifying them is hindered by the absence of his distinctive monogram. By 1855 he was better known and was invited to design the masthead and front page cartoon for the first issue of the Comic Times (1855).

He also contributed to Diogenes (1855) and Comic News (1863-1865) as well as mainstream illustrated magazines such as The London Journal (1858), Good Words (1861), London Society (1862-1865) and Every Boy's Magazine (1864-1865). His occasional full-page illustrations (such as the page of characters from Twelfth Night) appeared in Christmas and New Year editions of The Illustrated London News.

Charles Bennett died on 2nd April between eight and nine in the morning. His death certificate recorded the cause of death as neuralgia and atrophy (although his widow subsequently asserted that he had died of consumption).