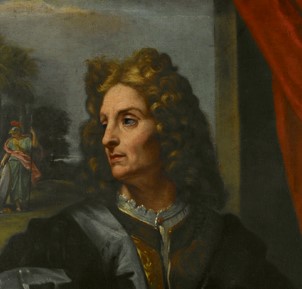 Carlo Maratta or Maratti was an Italian painter, active mostly in Rome, and known principally for his classicizing paintings executed in a Late Baroque Classical manner. Although he is part of the classical tradition stemming from Raphael, he was not exempt from the influence of Baroque painting and particularly in his use of colour. His contemporary and friend, Giovanni Bellori, wrote an early biography on Maratta.

Born in Camerano (Marche), then part of the Papal States, Maratta went to Rome in 1636, accompanied by, Don Corintio Benicampi, secretary to Taddeo Barberini. He became an apprentice in the studio of Andrea Sacchi. It was at this time that the debate between Sacchi and Pietro da Cortona took place at the Accademia di San Luca, the artists academy in Rome. Sacchi argued that paintings should only have a few figures which should express the narrative whereas Cortona countered that a greater number of figures allowed for the development of sub themes. Maratta's painting at this time was closely allied with the classicism of Sacchi and was far more restrained and composed than the Baroque exuberance of Pietro da Cortona’s paintings. Like Sacchi, his paintings were inspired by the works of the great painters from Parma and Bologna: Annibale Carracci, Guercino, Guido Reni, Francesco Albani and Giovanni Lanfranco.

He developed a close relationship with Sacchi till the death of his master in 1661. His fresco of 'Constantine ordering the Destruction of Pagan Idols' (1648) for the Baptistery of the Lateran, based on designs by Sacchi, gained him attention as an artist but his first prominent independent work was the 'Adoration of the Shepherds' (1650) for San Giuseppe di Falegnami. Another major work from this period was 'The Mystery of the Trinity Revealed to St. Augustine' (c. 1655) painted for the church of Santa Maria dei Sette Dolori.

Pope Alexander VII (reigned 1655–1667) commissioned many paintings from him including The Visitation (1656) for Santa Maria della Pace and the Nativity in the gallery of the Quirinal Palace where he worked under the direction of Cortona who selected him for this task. His pictures of the late 1650s exhibit light and movement derived from Roman Baroque painting, combined with classical idealism.

From 1660, he built up a private client base amongst wealthy patrons of Europe, establishing the most prominent art studio in Rome of his time and, after the death of Bernini in 1680, he became the leading artist in Rome. In 1664, Maratta became the director of the Accademia di San Luca and, concerned with elevating the status of artists, promoted the study and drawing of the art of Classical Antiquity. During the 1670s he was commissioned by Pope Clement X to fresco the ceiling of the salone in the Palazzo Altieri; the iconographic programme for The Triumph of Clemency was devised by Bellori. Unlike Giovan Battista Gaulli’s nave fresco in the nearby church of the Gesu which was being painted at the same time, Maratta did not employ illusionism; his scene remained within its frame and used few figures.

In 1679 or 1680, a daughter, Faustina, was born to Maratta by his mistress, Francesca Gommi (or Gomma). He legally recognized her as his daughter in 1698 and upon becoming a widower in 1700, Maratta married the girl's mother. His daughter's features were incorporated into a number of Maratta's late paintings.

With a general decline in patronage around the beginning of the eighteenth century and largely due to the economic downturn, Maratta turned his hand to painting restoration, including works by Raphael and Carracci. His sculptural designs included figures of the Apostles for San Giovanni in Laterano. He continued to run his studio into old age even when he could no longer paint. Maratta died in 1713 in Rome, and was buried there in Santa Maria degli Angeli.

Study for the altarpiece of Saint Rosalie among the Plague-Stricken (ca. 1657–60)

The Holy Family, The Madonna And Child Reading

Portrait Of Cardinal Camillo Massimo (circa 1671–72)

The Flight into Egypt

Virgin Of The Immaculate Conception

Portrait Of A Young Woman As Flora

The Virgin and Saint Rosalia Interceding with Christ (1625–1713)

The Virgin Immaculate with the Four Doctors of the Church, Study for the Dispute over the Immaculate Conception (1625–1713)