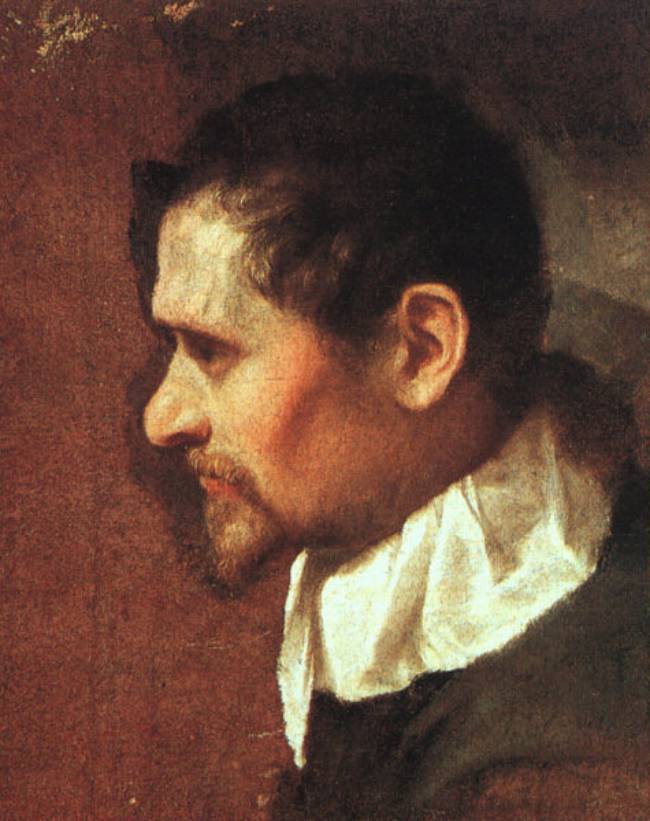 Annibale Carracci was an Italian painter and instructor, active in Bologna and later in Rome. Along with his brothers, Annibale was one of the progenitors, if not founders of a leading strand of the Baroque style, borrowing from styles from both north and south of their native city, and aspiring for a return to classical monumentality, but adding a more vital dynamism. Painters working under Annibale at the gallery of the Palazzo Farnese would be highly influential in Roman painting for decades.

Annibale Carracci was born in Bologna, and in all likelihood was first apprenticed within his family. In 1582, Annibale, his brother Agostino and his cousin Ludovico Carracci opened a painters' studio, initially called by some the Academy of the Desiderosi (desirous of fame and learning) and subsequently the Incamminati (progressives; literally "of those opening a new way"). While the Carraccis laid emphasis on the typically Florentine linear draftsmanship, as exemplified by Raphael and Andrea del Sarto, their interest in the glimmering colours and mistier edges of objects derived from the Venetian painters, notably the works of Venetian oil painter Titian, which Annibale and Agostino studied during their travels around Italy in 1580–81 at the behest of the elder Caracci Lodovico. This eclecticism was to become the defining trait of the artists of the Baroque Emilian or Bolognese School.

In many early Bolognese works by the Carraccis, it is difficult to distinguish the individual contributions made by each. For example, the frescoes on the story of Jason for Palazzo Fava in Bologna (c. 1583–84) are signed Carracci, which suggests that they all contributed. In 1585, Annibale completed an altarpiece of the Baptism of Christ for the church of Santi Gregorio e Siro in Bologna. In 1587, he painted the Assumption for the church of San Rocco in Reggio Emilia.

In 1587–88, Annibale is known to have had travelled to Parma and then Venice, where he joined his brother Agostino. From 1589 to 1592, the three Carracci brothers completed the frescoes on the Founding of Rome for Palazzo Magnani in Bologna. By 1593, Annibale had completed an altarpiece, Virgin on the throne with St John and St Catherine, in collaboration with Lucio Massari. His Resurrection of Christ also dates from 1593. In 1592, he painted an Assumption for the Bonasoni chapel in San Francesco. During 1593–94, all three Carraccis were working on frescoes in Palazzo Sampieri in Bologna.

Carracci was remarkably eclectic in thematic, painting landscapes, genre scenes, and portraits, including a series of autoportraits across the ages. He was one of the first Italian painters to paint a canvas wherein landscape took priority over figures, such as his masterful The Flight into Egypt; this is a genre in which he was followed by Domenichino (his favorite pupil) and Claude Lorrain.

Carracci's art also had a less formal side that comes out in his caricatures (he is generally credited with inventing the form) and in his early genre paintings, which are remarkable for their lively observation and free handling and his painting of The Beaneater. He is described by biographers as inattentive to dress, obsessed with work: his self-portraits (such as that in Parma) vary in his depiction.

The Return from the Flight into Egypt

The Return from the Flight into Egypt

Sleep, an Image of Death

Christ and the Samaritan Woman (1594)

The Madonna and Sleeping Child with the Infant Baptist (‘Il Silenzio’)

Study of Hercules Resting, with Separate Studies of His Head and Foot (1595-97)

Reclining Child from Back

Landscape with Man Sleeping beneath Tree (1595)

Drunken Silenus and Decorative Sketches; Studies for the Tazza Farnese (1599-1601)